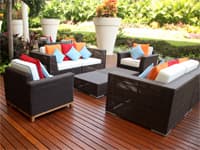 Chat Group Sales on the Rise

Chat group sales have been on the rise, and all signs show that they will continue to rise. According to Casual Living total sales for chat groups reached $1.09 billion in 2015, a 6.4% increase over 2014's $1.02 billion, and 37% of consumers that they surveyed plan to purchase chat group furniture to improve their outdoor spaces in 2016.

The most popular months for buying furniture for a chat group, which should come as no surprise, are March thru June. May is by far the most popular month with nearly a quarter of all sales coming in that month. However, in the Midwest, consumers like to shop a bit early, making March the Midwest's most popular month for casual furniture sales. Sales are pretty flat in July, but pick up a little in August as retailers tend to put existing stock on sale before sales die down for the winter.

With the casual furniture industry headed into its busy season, its important that you are able to keep up with growing demand. As the orders are coming in, if you need help with your cash flow, give DSA Factors a call today at 773-248-9000. We have the experience and expertise you need to help grow your business and manage seasonal demands through our accounts receivable factoring.

Most Consumers Shop Online for Furniture
Shopping with Social Media