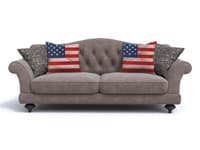 According to the Boston Consulting Group (BCG) recent report titled "Made in America, Again: Why Manufacturing Will Return to the U.S.", we can expect to start seeing furniture manufacturing returning to the United States. In fact BCG believes that furniture is just one of seven "tipping-point" industries that will start moving manufacturing jobs from China back to the US. The list of industries includes the automotive, electrical equipment and appliances, furniture, plastics and rubber, machinery, fabricated metal products, and the computer and electronics industries. These industries account for approximately $2 trillion in sales annually and account for 70% of all Chinese imports. Additionally this can lead to the creation of 2 to 3 million jobs in the United States.

According to BCG, Chinese wages have been rising at 15-20% per year, while the Yuan RMB has been appreciating against the US Dollar. The once enormous labor gap cost will shrink to less than 40% by 2015. As a result the industries mentioned above which have a relatively low labor cost, compared to high costs of shipping, materials, security, delivery responsiveness, and quality control, will begin to move manufacturing of products back to the US for sales throughout the Americas and Europe. The Chinese will not be closing their factories as they will still have a competitive advantage in Asian markets, but their competitive advantage will disappear in North America and most likely in Europe as well.

BCG does mention that Mexico will still have a much lower labor cost than either China or the US, and some manufacturing jobs will almost certainly go to Mexico. However the vast majority of manufacturing should be coming back to the US due to our larger skilled workforce and for logistical and security reasons in these tipping-point industries. The clothing and textile industries, however, most likely won't be returning due to their high percentage of labor costs which will allow the Chinese to keep their competitive advantage.

These changes are already becoming apparent. From 2001 to 2004 Chinese imports grew by about 20% per year. However, there have been dramatic decreases in recent years with imports flattening out and even declining in 2009, not just for Chinese imports but for imports from all low-cost nations.

At DSA Factors we are proud to support the American manufacturing industry and are ready to help out anyone, big or small, who is bringing manufacturing back to the US. We are located in Chicago and have been serving the furniture, bedding, giftware, housewares, trucking, staffing, and many other industries since 1986. We have helped many companies to grow over the years and will work with you to grow your business.

Using Factoring to Survive the Cash Flow Crunch
Factoring is the Answer to Improve Your Cash Flow!