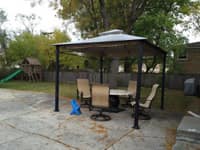 Patios: The Most Popular Outdoor Space

While just over four in ten Americans made upgrades to their outdoor spaces in the second half of 2014 and first half of 2015, six in ten Americans either have or are planning on making upgrades in the second half of 2015, with another two in ten planning on making upgrades in 2016. The most common upgrade by far is planting vegetation with over three quarters of all people who either made or plan to make upgrades planting new trees, flowers, or other vegetation. Next up is maintaining a deck or patio. Nearly half of all people who already made upgrades performed maintenance work on their deck or patio, with another third planning to do so. Other popular improvements include buying furniture and outdoor accessories, installing lighting, buying a grill, buying some sort of shade device, and performing other landscaping work. The least popular improvement is installing a new swimming pool.

When it comes to outdoor furniture, dining furniture is the most popular, closely followed by conversation groups, and then other seating options such as benches or hammocks, and finally fire pits. While alternative seating options and fire pits may be the least popular furniture choices, they are gaining in popularity as more people plan to purchase them than have already done so. Fewer people plan to buy outdoor dining furniture as have already done so, while conversation groups are remaining stable with just as many people planning on purchasing them as those who have recently done so.

With outdoor accessories it should come as no surprise that the most popular items are potted plants and flowers, with nearly nine in ten consumers who accessorize purchasing these. Just over half of people accessorizing will purchase decorative pillows, and a little less than half will purchase outdoor rugs. Tableware and wall decor are each purchased by about three in ten people accessorizing, while two in ten purchase statues.

For lighting, strands or strings of light bulbs are the most popular with just over half of all consumers using them. Only slightly less popular is hard-wired fixtures. After that about a third of people use lanterns and a quarter of people use landscape lighting. The less popular options include portable lamps, torches, candles, lighting under shading devices, and solar lights.

Finally with shading, a roof or umbrella is the most prevalent from of shade with a little less than half of all consumers using each. For umbrellas, table umbrellas are about twice as popular as free standing umbrellas. About one in ten Americans will use a tree for shade. The other less popular options include pergolas, awnings, gazebos, curtains, and screens.

With all these improvements being made in front and back yards across the country, if you manufacture products for the outdoors it is important that you have the ability to handle large orders if you want your merchandise to be stocked with major retailers. Let DSA Factors help you grow your business. With nearly 30 years of experience in the furniture and accessories industries, we have the ability to provide you with the cash flow you need while also managing and insuring all of your receivables. Give us a call today at 773-248-9000 and find out how we can help your business grow.

On The Move
Home Sizes on the Rise