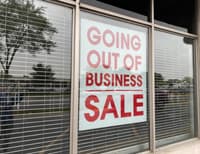 Surviving the Brick and Mortar Meltdown

Today Bonton began its liquidation sales, by the end of August there will be no more Bergner's, Boston Store, Carson's, Elder-Beerman, Herberger's, or Younkers. It was only last month that Toys'R'Us made the same exact announcement. On top of that, Sears, J.C. Penny, Neiman Marcus, Lord and Taylor, and Macy's have all been closing many locations, and now things are looking very bad for Bed Bath and Beyond. Even Walmart closed 63 Sam's Club locations at the start of the year. Things have gotten so bad that it was barely even news when Nine West filed for bankruptcy last week. So what does this mean for the retail environment?

Certainly things aren't looking too good. Bonton is a major department store that anchors many malls. For smaller retailers in the mall, losing Bonton could mean loosing foot traffic and maybe even permanently closing their stores as well. For other struggling anchors in the mall, it might give them reason to close their store in the struggling mall. In malls that have already lost an anchor, losing a second anchor could be the end for the mall. While we have seen many big box stores in strip malls close, this is the first time that we are seeing a major department store and mall anchor close all its locations. There is a very real possibility of it having a snowball effect with the other struggling department stores.

Of course, as a manufacturer or importer, you not only have to worry about the next bankruptcy filing, but also losing a major customer. In many ways, the latter can be much worse. The proof of this is Mattel and Hasbro. Both their stocks took a major hit when Toys'R'Us filed for bankruptcy, and then another when they announced they would be closing all their stores. In fact, billionaire Isaac Larian, owner of Little Tikes and many other toy companies, tried to purchase Toys'R'Us out of fear of what its closure could do to the toy industry.

Certainly you need to be selling to online retailers like Amazon, however, you can't only focus on online. Amazon might be one of the major reasons why all these stores are closing, in fact they announced on Wednesday that they now have 100 million Prime subscribers. But to focus only on Amazon is also problematic, after all, you don't want to have all of your eggs in one basket or limit where your customers can purchase your product. Plus, many of your customers may want to touch and feel the product before they purchase it, something that isn't (yet) possible with Amazon.

Of course, selling to brick and mortar can be very scary right now. While one option might be the increasingly popular taking a discount to get paid early, doing so won't actually protect you. The bankruptcy laws require you to pay back any money you received within 90 days of a company filing for bankruptcy if it is believed you received preferential treatment. Toys'R'Us was working with C2FO to offer its vendors early payment in exchange for a discount prior to filing for bankruptcy, and you can be sure that anyone who received early payment at a discount, is now returning that payment back to the bankruptcy court. What might have seemed like a smart option at the time, in the end did not offer vendors any protection.

Really the only thing that can protect you is by partnering with someone who is doing the credit checking for you, staying on top of breaking news, and offering you insurance. While credit insurance is available for extremely large, credit-worthy accounts, it typically isn't available for smaller companies or companies that show even the slightest inkling of financial distress. Non-recourse factoring on the other hand provides you with the protection you need on the widest range of customers available.

DSA Factors has been offering non-recourse factoring for over 30 years now. When you partner with DSA Factors, we handle all of the credit checking for you as well as provide you with insurance on the receivables which we approve. As an added benefit, we help improve your cash flow by funding you the same day you ship and invoice your customers. For more information about how factoring can help your business, give us a call at 773-248-9000.