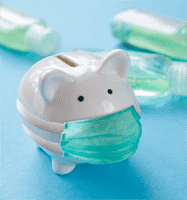 Here at DSA Factors we have been discussing the effects of the COVID-19 pandemic on small business through analyzing our data. The first sign of the slowdown occurred three weeks ago when we noticed a sharp decline in purchase orders. Two weeks ago the data showed that purchases had also slowed down dramatically. Payments on the other hand are the one thing that had a very minor decline over the first few weeks of the pandemic, but that can mostly be attributed to the fact that companies have 30 days to pay for an invoice. Last week marked approximately one month since schools and businesses started closing and stay-at-home orders became enacted, so last week’s payments data is the first to show a significant slowdown in payables.

While this last week wasn’t drastically different from the previous two weeks, it does appear that the number of purchase orders from small businesses is continuing to decline. The number of purchase orders last week dropped down to 25% of normal, down from 29% and 32% over the previous two weeks. Interestingly, the total dollar amount actually increased slightly this last week to 42% of normal, the previous week it had been at 39%, and it was at 49% the week before that. The fact that the number of purchase orders have declined, but their value has increased means that the purchase orders coming in are for larger dollar amounts, and therefore most likely from major retailers. Given that March is typically our busiest month, three weeks ago we estimated that orders for small businesses were down by 88% over the same time last year. Last week’s data is looking even worse and we now estimate that orders from small businesses are down by 90%.

Up until last week we saw payables slowing down slightly, but still within reason. Normally, approximately 66% of our receivables are current, accounting for approximately 78% of money owed to us. Of receivables that go beyond terms, the vast majority are within 30 days of the due date with only 5% severely delinquent both in terms of numbers and dollar amounts. This implies of course that large corporations typically pay a little bit faster than small businesses, but that most small businesses pay their receivables in a timely fashion. Normally we only track this data on a monthly basis, so prior to April 1st, we previously recorded this data on March 1st. Since April 1st we started tracking this data weekly.

The data from three weeks ago suggested that there had been a very slight slowdown in companies’ abilities to pay with past due invoices rising by approximately 4% both in terms of number of invoices and dollars. While this drop is noticeable, statistically it probably isn’t too relevant. Two weeks ago the slowdown became more pronounced. The number of current receivables hovered just above 50% which accounted for 70% of money owed. The much sharper decline in number of receivables compared to money owed would imply that it is mainly small businesses who were finding it difficult to pay.

Last weeks data paints a drastically different picture. The number of receivables still current have dropped down to 43%, accounting for 58% of money owed. While the amount of severely delinquent receivables, which hadn’t increased by too much over the previous two weeks, have increased to approximately 10%. These numbers of course are very disturbing and painting a very sad picture of the state of small businesses in America. While many small businesses are still making payments, and our overall receivables have lowered by 15% since the start of the month, it is very clear that many small businesses are simply unable to pay for the merchandise they purchased.

These numbers aren’t surprising given the number of communications we have received from businesses who have been forced to shut down for over a month now, and others who remain open but don’t have any sales or even any customers. Many are waiting to receive SBA loans that were part of the $2.3 trillion CARES package, which includes the Paycheck Protection Program (PPP) that went live about a week and a half ago. Once these funds begin to come in, many of the small businesses who have contacted us say that they should be able to pay what they owe. However, it is unclear how many small businesses have actually received funds yet, funding is taking much longer than the three days promised in the CARES act. There is also a fear that the money set aside for the PPP program is about to run out, there already is nowhere near enough funding for the Economic Injury Disaster Loan (EIDL) program run by the SBA.

While the $1200 payments to individual who qualify have started getting deposited in people’s bank accounts this week, it appears that most individuals will be using the funds to either purchase essentials such as food, pay credit card bills, rent, or their mortgage, while others will be putting the money into savings in case they need it later during the pandemic. While the 2008 stimulus money was partially spent in ways that helped the economy, it is unlikely that will be the case this time around. As a result, it is doubtful small businesses will realize any benefit from these deposits into people’s bank accounts.

Please check back each week as DSA Factors continues to analyze the data to bring you up to date with the status of small business in America.