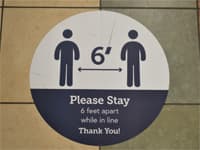 While three weeks ago we reported a good week for large businesses based on several large orders our clients received, last week was the first time that we saw promising numbers for small businesses as well. As many states have begun to reopen, only time will tell if the affects will continue to be positive for both businesses as well as people’s health. Now lets take a closer look at last weeks data.

Last week we saw the highest number of approval requests since the COVID-19 pandemic began. While we were only at 45% of normal levels, that is a drastic increase over the 29% of normal levels that we have been averaging since lockdowns first got set in place. The total dollar value was at 54% of normal levels, a far cry from the 78% we saw three weeks ago, but a huge increase over the 33% we saw two weeks ago. While there is still a large disparity between number of approval requests and total dollars, it does still appear that small businesses are placing more purchase orders than they had been doing earlier in the pandemic.

Just as we saw an uptick in credit approvals, we also saw a large uptick in purchases, meaning that orders actually got invoiced. Last week we are up to 63% of normal levels. While three weeks ago we saw a much higher percentage based on several very large orders, if we consider that week to be an outlier, purchases were up over 50% from all previous weeks of the pandemic, and almost double the 35% from two weeks ago. This is another positive sign that the economy is beginning to recover.

We have also seen more companies paying off their invoices, including invoices that were past due. The total number of outstanding invoices have dropped to 62% of their peak level on April 1st, and to 75% of total dollars from their April 1st high. These numbers both dropped by 10% from last weeks numbers. This of course is even more significant considering that at the same time we had one of our busiest weeks of purchases. The fact that more businesses are able to pay their bills is a very promising sign for the economy.

If we dive into this data even deeper, we also saw a 2% increase in the number of current receivables, this marks the first time since the pandemic began that the percent of current invoices has gone up. The total dollars of current receivables also increased by 1%, marking only the second time that we have seen a positive change since the pandemic began. While these numbers may seem small, the important thing to keep in mind is that they are indeed positive, especially considering that both numbers were falling by as much as 12% per week in early April.

While the number of current receivables and receivables 1-30 days past due has dropped by 16% and their dollar value has dropped by 12%, the number of invoices that are more than 30 days past due has also dropped by 5% although total dollars increased by 4%. This would imply that the companies that are struggling the most are the ones who placed larger orders. While certainly small businesses are faring worse than their larger counterparts, it appears that smaller businesses may actually be recovering faster, possibly due to Paycheck Protection Program (PPP) funds becoming available.

Of course, the big question to ask is if reopening has had a major impact on small business. Of the states that have reopened, prior to the pandemic they accounted for about 40% of our volume. During the pandemic however, they only accounted for 19% of our volume. Based on these numbers it is not surprising why these states have decided to reopen, their economies have been hit much harder than the economies of states who are taking greater safety precautions. While it may be a little bit too early to report on the effects of reopening, over the last two weeks these states only accounted for 8.5% of our total volume. It will be interesting to see if these numbers improve, but the numbers for Georgia, who nearly two weeks ago became the first state to reopen, are not promising. Since reopening on April 24th, we saw their volume drop to 40% of what it had been at during their lockdown which was effective from April 3rd.

From a payables point of view, things don’t look much better. The states that have reopened seem to be having a slightly harder time paying their expenses. Our data suggests that businesses in these states are 3% more likely to be past due than businesses in states that haven’t reopened. However, it takes time for checks to be delivered in the mail, so the next week or two may tell us more about if reopening actually leads to more available cash. These businesses may need to rehire employees, and if sales don’t pick up right away they could actually wind up in worse shape than they are already in.

As we reported earlier, the states that were quick to react have actually fared better economically than states that were slow to react. A lot of this may be due to the fact that major corporations such as Amazon, Target, and Costco are located in these states. These are also the states that have not reopened yet, so it is possible that these major retailers who have been thriving during the pandemic may also be the reason that states that are reopening still aren’t recovering. Keep following the Factoring 101 Blog each week as we report on the data we are seeing from the small business community.