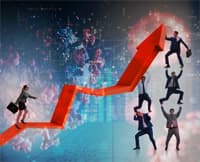 Last week we had reported our strongest week yet since stay-at-home orders were implemented to slow the transmittal of COVID-19. While this week’s data isn’t quite as strong as last week's, it is still stronger than any other week’s data that we have seen throughout the pandemic, and a very strong sign that the economy is recovering to near normal levels.

This week we saw a very minor decline in the number of approval requests we received. With the number of requests falling to 76% of normal levels from last weeks 81%. Meanwhile total dollars had dropped from 101% of normal levels last week to 78% of normal levels this week. The drastic decline in total dollars compared with the minor decline in number of requests would imply that our clients received fewer purchase orders from major retailers than they had the previous week, although purchase orders from small businesses would have remained steady. Of course, last week’s data was coming on the heels of poor data the previous week, so it is quite possible that last week’s data could be the result of slow reporting of the previous weeks data. Regardless, the data we collected this week is very promising, and while it is too low to be considered within a normal range of fluctuation, it is a very promising sign that the economy is headed in the right direction.

Purchases have been harder to gauge as they seem to fluctuate wildly from week to week. However last week we reported purchases reached 76% of normal levels which was our second strongest week yet, and the only stronger week being early on in the pandemic when we had several very large purchases from major retailers, all from purchase orders placed prior to the pandemic. This week purchase levels reached 88% of normal levels, which is nearly a 250% increase over the lows we experienced just one month ago. In fact, purchases have now increased in 4 of the last 5 weeks since we experienced that low.

Payables are continuing on their path to recovery. It appears that the businesses who are placing orders are in a position to get them paid off promptly, and the vast majority of businesses who placed orders just prior to the start of the pandemic have now paid for those orders. However, it does appear that businesses that were struggling prior to the pandemic are still struggling as very few of them are making progress in paying off their old invoices.

Total outstanding dollars are up again for the third straight week, this time increasing by 3% after increase of 2% and 1% in the previous two weeks. This increase has also coincided with over a third of very past due invoices being paid off over the same period. When looking at current dollars, they climbed nearly 6% this week after they climbed by 13% last week, which was the first time we started to see them rise. 79% of all dollars are now current, which is the highest level we have seen yet, and slightly better than what would be considered normal.

In terms of number of outstanding invoices, we have seen much more dramatic increases. They rose by 12% this week after climbing by 4.5% the week before. The number of accounts with outstanding invoices grew in a similar way, climbing 15% this week after a 7% climb last week. The inverse relationship between the growth in number of invoices and accounts compared to total dollars would suggest that much of the business that occurred over this past week had been with small businesses. At this point, nearly 70% of outstanding invoices are current, which is significantly above the 66% that would be considered normal.

This week only 17.5% of all receivables are now 1-30 days beyond terms, and they account for 10% of total outstanding dollars. Neither of these numbers have really changed much from last week, but they are still well below normal levels. This would seem to imply that only businesses that can afford to pay for their merchandise in a timely fashion have been placing orders during the pandemic. However, what we don’t know is if this is due to these businesses seeing an uptick in sales, or if they are simply strong financially and confident in their ability to recover.

Another very promising sign is what is happening with receivables that are 31-60 days beyond terms. 39% of these receivables and 47% of the total dollars in this category have gotten paid off over the last week. At this point, almost all of these invoices would have been created during the pandemic, although it is possible that some of the orders were placed just prior to the start of the pandemic. We saw the number in this aging bucket peak just 5 weeks ago when they accounted for 23% of all outstanding invoices and 12% of all outstanding dollars. Today they only account for 4.6% of all invoices and 2.5% of all dollars. We have experienced an 81% decrease in both the number of receivables and total dollars in this category over this 5 week period. Of course, the invoices in this category 5 weeks ago would now all be in the 61-90 days past due category, and the invoices in this category today would have been in the 1-30 days past due category 5 weeks ago. However, 5 weeks ago invoices that were 1-30 days beyond terms made up 33% of all invoices and 17.5% of all dollars. That is a pretty drastic improvement, and while these numbers may still be a little high, they are only maybe 1% off from normal levels.

That of course brings us to invoices that are more than 61 days beyond terms. The good news and the bad news is that the number of invoices and total dollars in this category has not changed significantly over any of the previous 5 weeks. While the bad news would be that newer invoices have aged into this category over the past 5 weeks, the good news is that an equal number of invoices have been paid from this category over the same 5 weeks. In other words, invoices that were problematic 5 weeks ago are less problematic today, but there are an equal number of new invoices that have since become problematic. It is important to keep in mind that the invoices that are 61-90 days past due would have all been created prior to the first stay-at-home orders, but would have become due after the orders were issued. The vast majority of the accounts in this category are for clothing retailers, including major department stores, and businesses in hospitality such as restaurants and hotels. Nearly all of the invoices that are more than 90 days beyond terms, were already severely past due when businesses were forced to shut down, many of which were on payment plans that they have failed to keep up with as a result of the pandemic.

The decision on when to reopen appears to have been made heavily on the state of the local economy in each state, but it certainly does not appear to be the case that reopening earlier has had much of a positive effect on the states that chose to do so. Rather it seems that how strong a local economy was during stay-at-home orders has a direct correlation to how quickly that economy has been able to recover. In the meantime, it is becoming very clear that reopening has led to a surge in COVID-19 cases, even in states that waited longer to reopen. While it was major cities and their suburbs that were hit the hardest early on, some of the highest rates of infection are now occurring in small towns and rural areas. If states are forced to close again, it could be devastating for the businesses that are just starting to bounce back from the first lockdown. DSA Factors will continue to monitor and report on the situation as it continues to evolve.