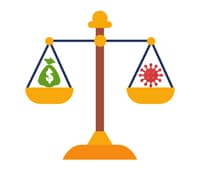 The Economy is Stabilizing as the Pandemic Intensifies

There are now over three million Americans who have been infected with COVDI-19, yet as the pandemic rages on, the economy seems to have stabilized. Once again very little has changed this past week for the economy according to our data. While the economy has yet to make a full recovery, it does seem that retailers in states that have done a good job controlling the coronavirus may have returned to normal levels of business. However, as infection rates continue to skyrocket across most of the South and West, the retailers in these states are still suffering.

Purchases jumped significantly last week reaching 92% of normal levels, the highest level yet since the pandemic began if we don’t include extremely large orders that have skewed the numbers. This is a very promising number and falls in line with some of the approvals numbers we’ve seen over the last few weeks.

Payables continue to look good. After 5 straight weeks of continual growth in total outstanding dollars, we experienced a 4.5% decline this week, despite some of our highest purchase levels yet. While this would imply that more invoices got paid off than were purchased, interestingly the total volume of current receivables declined by 6% while the total number of past due receivables increased by 2.5%. This would mean that we must have received a large number of payments prior to the invoices becoming due this week. We are saw a 4% decline in both the number of open receivables and number of accounts with open receivables, marking the first time we’ve seen these numbers decline in quite a few weeks now.

Despite the decline in current receivables, current receivables still make up 70% of all receivables and 82% of total dollars. Both of these numbers would be at the high end of what is considered to be normal. So, it still appears to be the case that companies that are placing orders have the ability to pay for them in a timely fashion. Furthermore, current dollars are still at 92% of where they were on March 1st, our last data point before the pandemic took a major toll on the economy.

Ever since reaching their peak in mid-April, the 1-30 days late bucket had been in decline until last week when the number of invoices grew by 25% and dollars grew by 60%. This week continued that growth in this bucket but at a slower rate. The number of invoices that are 1-30 days beyond terms grew by 10%, while total dollars grew by 12%. Despite two straight weeks of growth, invoices in the 1-30 days late bucket still only account for 23% of all invoices and 12% of all dollars. Both of these percentages would be at the low end of what is considered normal. Again, the growth in this bucket can most likely be attributed to the growth in the current bucket that began in mid-May and continued throughout June. For that reason, it would be safe to assume that we will be seeing continued growth in this bucket throughout July.

The 31-60 days beyond terms bucket remained stable this week, with virtually no change in terms of number of number of invoices or dollars. Al of these invoice would have been created between early April and early May, at the height of the pandemic, so companies placing orders at that time would have been well aware of the difficulties that they would be facing. As a result, this bucket still holds much less than half of what we would consider to be normal, so not seeing any change isn’t really a cause for concern.

The positive news this week occurred with invoices that are severely past due. Invoices in the 61-90 days late bucket were cut in half, and total dollars in this bucket declined by 40%. These invoices now make up 1.5% of all invoices and 1.3% of all dollars, percentages that would both be at the high end of what is considered normal. These invoices would have mostly been created prior to stay-at-home orders being enacted, and all of them would have become due after non-essential businesses would have been forced to shut their doors. To see these numbers as drop significantly as they have is a major sign that businesses have been able to recover.

Unfortunately, we saw virtually no change in invoices that are 91 days or more beyond terms. In fact, we’ve seen virtually no change in this category going all the way back to February 1st. These are all accounts that were already past due (some severely past due) at the time that stay-at-home orders were issued and businesses were forced to close their doors. It is not surprising that businesses that were already struggling prior to the pandemic would continue to struggle at this time.

Nothing much has changed in terms of which states’ economies are doing better. It still appears to be the case that the states that took greater precautions and had greater success in slowing the spread of the coronavirus, also managed to minimize the blow on their local economy. We will continue using the 3 dates that we have been looking at in order to make comparisons. We will be comparing states that issued stay-at-home orders prior to March 28th, to those that issued orders after. We will compare states that started their reopening process prior to May 9th, to those that started later. And we will compare states that were surging as of June 23rd, to those that were remaining stable or improving at that time. Additionally, we will also look at states that have experienced exponential growth in infections over the past few weeks.

New this week, we will be looking at one more number, we will look at the states that have experienced exponential growth in infections over the past few weeks. Those states are Arizona, Florida, Louisiana, South Carolina, and Texas. While Louisiana was one of the hardest hit states early on in the pandemic, they seemed to had gotten the virus under control up until about a month ago. The other four states had relatively low case counts early on, but now appear to be having infection rates that rival what New York saw at the start of the pandemic. Businesses in these states, all of which are heavily reliant on tourism, were operating at a dismal 18% of normal levels prior to May 9th, and since then have only been able to recover to 48% of normal levels.

Looking at the US as a whole, the nation’s economy was operating at 47% of normal levels prior to May 9th, and has been operating at 81% of normal levels since then. While we can not say that the economy of the US has recovered, it does at least appear to have stabilized for now. However, given the horrible numbers coming out of Arizona, Florida, Louisiana, South Carolina, and Texas, which typically make up about a quarter of our nation’s economy, it is easy to see how the economy could quickly stumble again if the nation fails to get COVID-19 under control.

Has the Economy Recovered from COVID-19?
Economy is Slowing Down as Coronavirus Cases Climb